BlackCoin has been a sleeping giant lately, but a very busy one. And all the while, he has quietly continued to grow, to truly outrageous proportions. Soon he will emerge from his hideaway cave in Crypto Mountain, and unleash the biggest, best, and most bad-ass crypto-glory of anything you have ever seen.

Anyone who follows the reddit updates, BlackCast shows, twitter and regular flow of editorials already knows about many exciting developments, like Sentinel, BlackBox, NightTrader, BlackHalo, the new BLKfeed community hub, and so much else. But what I want to tell about now are a few of the major developments you may not know about, or may not have heard news on lately. These are personal initiatives, some of which I have worked on passionately for weeks or indeed months. And this is only a partial list! Forgive my reticence on the several other items. In some cases I am literally under legally binding non-disclosure agreements until certain milestones are reached. In others, I simply refuse to waste people’s time with pre-ANN’s of big plans still too early in execution to know the full merit of.

With that, I come to my first very BIG and very REAL item: The BlackCoin Music Video! I originally pitched this idea on btctalk waaaaay back in the day. It finally started to get real in early May, when, thanks to the generosity of a small group of investors, I was able to sign the talent, a director, DP and everything/everyone else needed for this massive undertaking. I then worked closely with the artists for weeks on crafting a completely bad-ass original song. It’s hilarious, brilliant, enlightening, hugely entertaining. The artists wrote an awesome beat, recorded the song to perfection, and started storyboarding like mad. We finally shot the entire video on July 20, one of the most exciting and rewarding days of my life. Editing is underway and going brilliantly. We are on track to finish post-production and meet our release date later this month. I assure you, it will go viral on its own merits. And go even more viral due to a carefully planned PR onslaught! This will very likely include major television coverage on one of the largest TV networks in the USA (I already have informal commitments to this effect).

As glorious as this is - it is NOTHING, compared to several other major developments already set to unfold in the sight of the world. Yes, that’s global attention I am talking about. I will post “Part II” tomorrow, to reveal just one of them. This is a DONE DEAL, already going to press. Literally.

In the last two weeks I have added substantially to my long-term BlackCoin holdings - now up 112K BC from late June levels - and at the most advantageous prices the world is ever likely to see again. And I will continue buying. Anything under 30K sat is a joke. I have been in BlackCoin since the beginning, and have happily and proudly bought as high as 36K.

BlackCoin is becoming a mature alt-currency. No more booster-rocket new fadcoin pump needed, thank you. We have the bones. We have all the bells and whistles too. The world is growing ever riper for an advanced altcoin to move center stage. And that coin will be BlackCoin, like no other.

If you want to post something or ask any questions, feel free to do it on the original post here

Thanks to Gritt & Prisius for recording the actual contracting software. This episode is prerecorded, ... 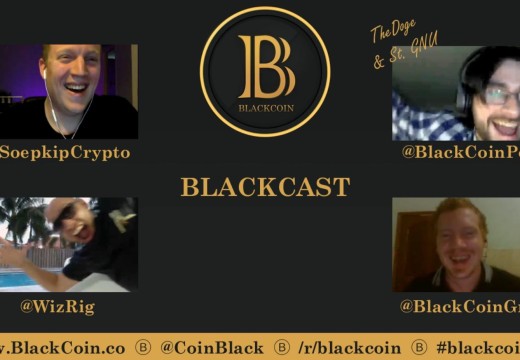 If you have missed the #1 BlackCast, you can see it here: Share this article:The ...