Bitcoin transactions have been called a “trustless” process, in that the nature of the network removes the need for a middleman to act as a central point of trust between the two exchanging parties. Yet outside of pure peer-to-peer transactions, bitcoin usage requires a great deal of trust in platforms and services that are vulnerable to intrusion, sabotage and failure.

The solution, many agree, is the use of decentralized platforms that mitigate or eliminate points of failure that can cause crippling losses for users and dampen perception of what is still an emerging technology. Next-generation platforms built using digital currency technology concepts are in development, yet several months ago, the first decentralized two-party smart contract quietly entered public beta and has been pushing the boundaries of its original design.

BitHalo allows two parties to engage in a broad variety of smart contracts without having to pay any fees or overhead costs. In terms of usage, it can be utilized by two companies that want to establish a business contract over a predetermined period or by individuals who want to trade bitcoin or blackcoin, the digital currencies currently supported by the platform.

CoinDesk spoke with developer David Zimbeck, who said that the open-source BitHalo works around several problems that keep smart contracts from being built on top of the bitcoin block chain. The drive to solve these issues has lead to the creation of smart contract platforms like Counterparty and ClearingHouse, as well as the next-generation block chain project Ethereum.

The solution, Zimbeck explained, is maintaining the integrity of the block chain by avoiding bloat, or excess information that can prove problematic for the network and results in a situation where network users have to download and constantly update a massive amount of data.

“Bitcoin actually has a limit on the number of transactions it can send [per block]. The reason for that limit is that they don’t want to send more than you can use on your bandwidth.”

BitHalo avoids this through a peer-to-peer client that connects users directly, using bitcoin and blackcoin has means for value exchange and encrypted email as a means of distributing contract data. Among the potential applications include joint banking accounts, sales escrow, employee contracting and payroll and anonymous transactions.

BitHalo and its sister-client, BlackHalo, allow for the creation of secure multisig wallets that then form the basis for the platform’s extensive smart contract applications. CoinDesk demoed the platform, which can be used to create individual, joint or group wallets. 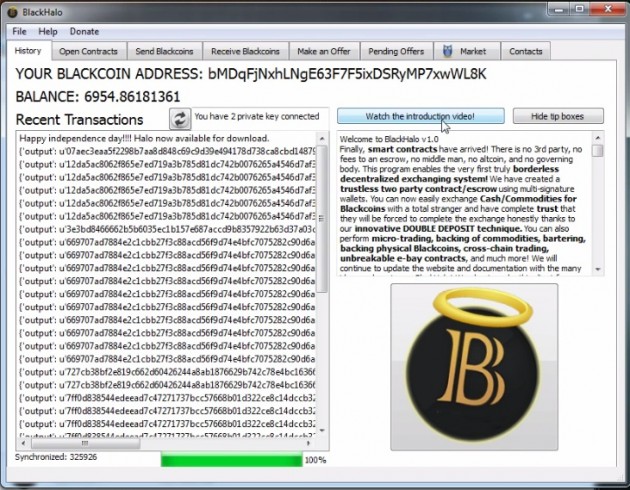 Once created, the wallets can be used to conduct multi-signature transactions, escrow or other forms of programmed exchange made possible by BitHalo. This type of functionality can also be seen in services like Armory’s Lockbox multi-signature wallet.

With BitHalo, the activation of two private keys is required for any transaction to be allowed and broadcast by the party or parties in control of the wallet. This lets a wallet owner, for example, keep one of the private keys on a secure offline flash drive, enabling a significant degree of security for the user. 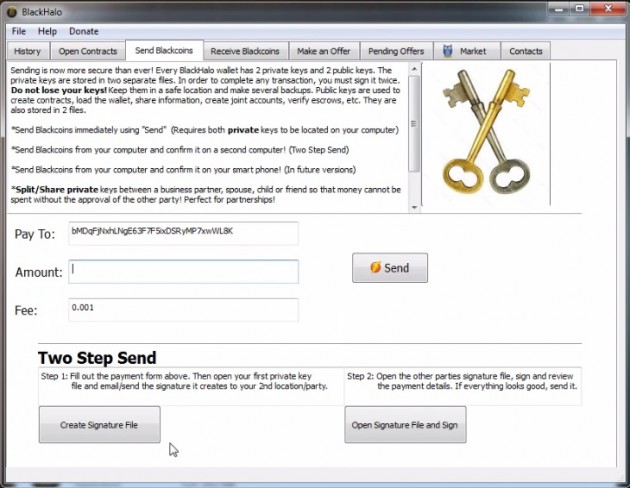 Multi-party access to a wallet is also made simple with BitHalo. Wallets created using the client can only be open when the necessary keys are available. If the parties involved want to keep the wallet closed and secure when not in use, these keys can be distributed and stored safely in the meantime. This makes joint accounts – and safeguarding access keys – easy to accomplish.

BitHalo’s design carries implications for both peer-to-peer and marketplace-style e-commerce, enabling buyers and sellers to exchange goods and services using secure, unbreakable contracts. As well, BitHalo gives parties who may not trust or even know each other the ability to engage in fair exchange without the risk of financial loss or fraud.

In order to enforce accountability between two parties that want to establish a contract, BitHalo requires proportional escrow deposits that act as a form of personal insurance.

As shown below, the user interface allows those drafting the contract to set the amount they want to put in escrow and the length of the contract duration. Each party puts in an equal amount, making one side just accountable for the success as the other. 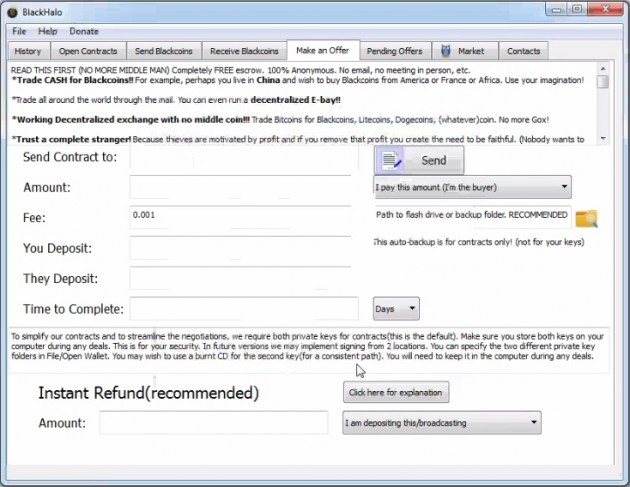 Once established, this connection – with the underlying bitcoin or blackcoin deposit – enables both parties to exchange coins, conduct business or buy and sell goods and services to one another. Parties that receive contract offers can choose to accept or offer a counter-proposal.

“Lets say you wanted to employ somebody at $30 an hour. Employees have been known to not work hard and have been known to flake and conversely in many cases, employers don’t pay and hold power over employees. So to solve this both employee and employer put up $60 in escrow (a joint account with two keys). Then the employer can pay on the hour or on the milestone for work completed. If either party tries to cheat the deal then they actually lose money.”

BitHalo is set for an expansive period that will see the completion of BlackHalo’s public beta and the completed development of the BitHalo program. Once finished, the application of smart contracts will be available to both bitcoin and blackcoin users.

Another aspect of the overall project is NightTrader. Currently under active development and part of the BlackHalo beta, the decentralized exchange and trading platform gives users a marketplace for conducting contracts and doing business with new and existing parties. NightTrader also includes an encrypted messaging system that enables parties to securely communicate and do business.

According to Zimbeck, NightTrader is being developed to function as a type of internal search engine for potential contracts. Once integrated, the BitHalo client will support in-house communication for users looking to hire individuals, barter goods or lend money.

As Zimbeck explained, BitHalo is a step toward the type of functionality promised by so-called bitcoin 2.0. He told CoinDesk:

“[BitHalo] is like the ladder or the hammer. It’s so simple and without it, there is no way to enforce code or build a house. This program effectively is the foundation of bitcoin 2.0 and best of all, it can be used right now for free.”

The next few months will see the launch of the BitHalo client with a streamlined, easy-to-use interface, as well as the full integration of NightTrader. With a full launch set for the near future, BitHalo will no doubt play a role in the spread of decentralized exchange platforms within the broader bitcoin community.

Original article can be found on here on Coindesk. 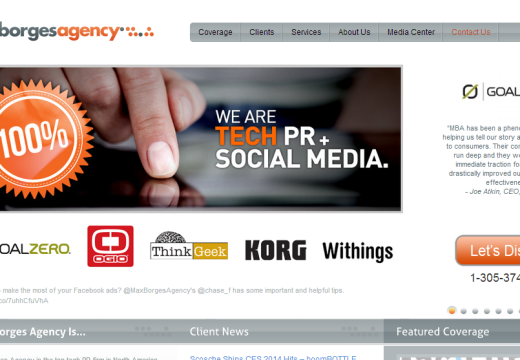 Hi all, First off, I am not a member of the foundation but only a ... 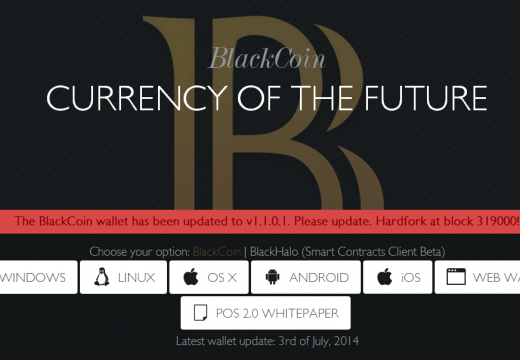 With the upcoming hardfork of BlackCoin to PoS 2.0 we need everyone to update their ...