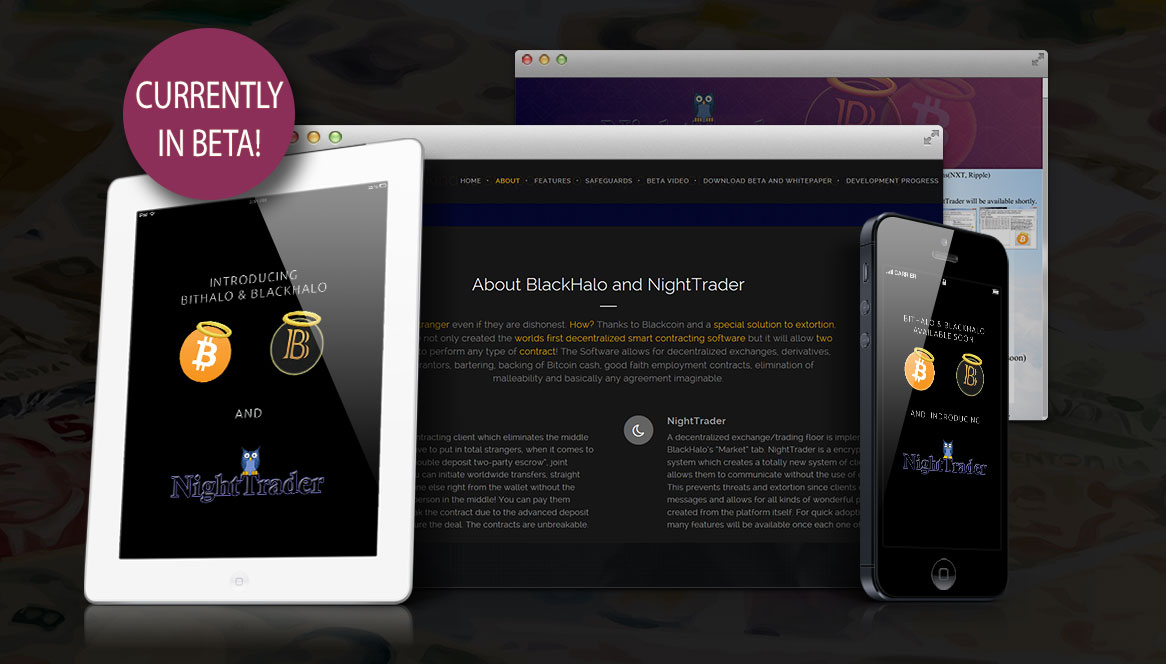 If you’ve been around alternative cryptocurrencies for any amount of time you’re probably aware of the ‘vacuums‘ of functionality that have been in desperate need of fixing.

The year 2014, although plagued by mediocrity and scams, has also seen tremendous advances in the basic technology and concepts that define crypto.

Many of these concerns were directly addressed in July when BitHalo, NightTrader, and BlackHalo were simultaneously released.

BlackHalo seeks to reduce the most common areas of breakdown that have been plaguing the cryptocurrency scene. If you experienced the Mt.Gox meltdown, you’re probably aware already just how dangerous the current concept of centralized exchanges really is. Mt.Gox was only the tip of the proverbial iceberg, though.

This year we’ve seen multiple ‘hacks‘ of altcoin exchanges, with no level of oversight. We don’t know if the hacks actually happened or if the exchange itself lost or stole the funds. There’s no way to be sure. In a ‘trustless‘ environment, the basic tenets of finance become very complex. Decentralized exchanges have become a sort of Holy Grail of Altcoins that are sought after by many. Included in the ‘Dream Team‘ of features are ‘Unbreakable Smart Contracts’ which usher in a new era of accountability through the cold enforcement of impersonal technology.

If that claim sounds grandiose, it is. However, the applications that can be developed from this type of core technology literally are limitless. The exchange of physical goods can be employed in this manner, as well as tons of variations of classic contracts for digital goods and service fulfillment.

The power in the system comes from the client which requires two counterparties to make simultaneous deposits. This form of escrow protects both parties from fiscal loss, eliminating the need for trust. As you are probably aware, lack of trust has been one of the largest drawbacks plaguing online commerce since its inception.

For a full list of features, please refer to the White Paper. Without worrying too much about the technical aspects of the client, it’s easy to understand the implication of its’ use. Two parties make deposits and then enter into an agreement. If one party doesn’t live up to their end of the agreement, the deal is voided and the funds are distributed according to their agreement. There is no third party that needs to intervene and no central authority is involved in the transaction.

As you can imagine, this eliminates common issues like ‘chargebacks‘ that happen due to fraud or other malfeasance. Unless both parties are satisfied that the contract terms have been met, the deal will not be consummated. There is no need for third party mediation because the two parties agreed to the smart contract in the first place and the client enforces all terms of the deal.

The NightTrader client establishes a completely decentralized exchange system. NightTrader employs BitMessage and goes a step further by enabling decentralized order books, servers and native communication protocols. NightTrader’s approach is to place a focus on an “agreement” between computers through a process of message filtering.

If you’ve read this far, your head is probably spinning with excitement about the possibilities that are enabled by BitHalo/BlackHalo and NightTrader. David Zimbech, who developed the system, chose BlackCoin because it has fast transaction times. It requires quick confirmations to keep people satisfied when completing financial transactions. Since the two parties don’t really trust one another, the faster the client completes the transaction the better it is for both party’s mental states.

A system like this eliminates the need for feedback and ratings systems. Users won’t have to rely on someone else’s opinion about a certain person or vendor, they can use their own experience and allow the technology to enforce the deal.

This system is a validation that cryptcurrency is advancing rapidly and that game changing technology is really in our midst.

Thanks for stopping by and reading. If you have any comments, please leave them below.

Finally we have our own charts website created by z3r0! Looks really great, check it ...

I have never seen a spirit of development and innovation like there is in the ...