We were struck by a PR email we received this week directing our attention to athree-month old crypto currency called “Blackcoin”.

According to said PR:

… [Blackcoin] is already one of the top 10 by market cap. BlackCoin is based on many of the ideas contained in the original Bitcoin protocol, but with a few important changes. Most critically, BlackCoin secures its network entirely through Proof of Stake, compared to Bitcoin, which uses Proof of Work.

1) No mining – Proof of Stake systems secure the protocol through an efficient, decentralized process called “minting,” while Bitcoin uses a mining process that has been well documented as expensive and energy-intensive. BlackCoin’s system is fairer to the entire community, and potentially more resilient to a 51% attack.

2) No inflationary pressure – Bitcoin’s mining process creates an inflationary force that can be measured in USD. This chart shows Bitcoin’s inflationary force (Reward last 24h) at close to $2 million, suggesting that almost $2 million needs to be pumped back into Bitcoin per day just to maintain the price. BlackCoin has limited the growth of its supply to 1 percent per year.

How interesting again. Wait. Hang on. What?!!!

You’re saying the “inflationary” force in the not-at-all-inflationary bitcoin is now its key problem? And an even more deflationary currency is needed because it takes at least $2m of new capital entering the bitcoin system to support its price in the face of new supply?

But you’re also saying that this is okay because — despite the currency not being mined in the conventional way — the network will reward currency holders with an interest rate of 1 per cent per year instead?

Can’t imagine where the idea to have money supply set by an issuer agent and readjusted according to a rate could have come from? As for new supply being redistributed to everyone equally via  open wallets and thus being so much fairer than bitcoin…

Once again, can’t think of a system like that at all. Can you?

Wait, here’s some more about the genius behind Blackcoin from an interview with the pseudonymous inventor Rat4 (or could it be Stephen L. Reed, the creator of the proof of stake system?) on a site called Follow the Coin:

Blackcoin has 1% interest built in for users who keep their Blackcoin Wallets open. Blackcoins will “mature” after 8 hours of being in an open wallet and mature coins will gain 1% interest every year. Unlike most coins where miners are required to maintain the public ledger of the coin (keeping track of all of the transactions) Blackcoin uses open wallets to keep this data up to date and rewards those who do it with the 1% annual interest.

And of particular interest will be this:

The Blackcoin community has put together a new mining pool, BlackcoinPool, that will exclusively pay out in Blackcoins. It will work similar to Multipool (see our interview with them here) where the pool will always mine the most profitable coin (based on currency exchange values and mining difficulty), auto exchange the mined coins to Blackcoin, and then pay out miners in Blackcoin. This is interesting because it means a good amount of value from other coins is constantly being exchanged into Blackcoin, helping it maintain higher daily trade volume. The more miners using BlackcoinPool the more Blackcoins being purchased, which raises demand and directly increases the value of the coin.

Which means it’s the cryptocurrency which comes with its own manipulation (a.k.a plunge-protection) system.

Indeed, rather than devoting your hash-power to mining Blackcoins (because their supply is set, and only changed by interest rate) you devote it to mining altcoins which happen to have the greatest return on power deployed relative to seigniorage rendered, and use those alternative coins to then bid up the value of existing Blackcoins.

A bit like mining foreign reserves and then deploying them to support your own currency, which conveniently can’t be mined by anyone but you.

Small wonder Blackcoin has managed to grow so quickly and even be referenced as a major bitcoin competitor by Citi’s disruptive innovations report this May.

But the excitement doesn’t end there. Oh no. There’s much more genius to come from BlackCoiners.

Here’s Rat4 on some key upcoming innovations and events:

And since BlackCoin’s success depends on overtaking bitcoin we’ve also been blessed with some refreshingly negative reviews of bitcoin:

One of the biggest reasons not to use Proof of Work is the huge amount of mining that is needed to keep the network secure. For Bitcoin for example there are millions put into mining gear, not to mention electrical costs. That is not needed for BlackCoin itself, the coin is simply supported by the wallets that are open and since those are on computers already running this proofs for a highly energy efficient way of doing things. Next to that the amount of mining is not dependant on the value of the coin itself. For coins like Bitcoin, Litecoin and other Proof of Work coins mining has to be somewhat profitable for the miners to actually have incentive to mine the coin. If the mining gear and the electricity costs are too high because the value of the coin is low there is no real incentive to keep the network alive.For proof of stake this does not matter in the slightest.

Okay geniuses. Riddle me this. Who is it that’s bankrolled the BlackCoin system? Or in BlackCoin speak: where did the stake in the original “proof-of-stake” come from? And who owns the bulk of those stakes anyway? Questions we just don’t know! And answers we can’t seem to find easily!

But at least we know there’s a special relationship with these guys*: KNCMiner, from Sweden, the manufacturer of golden goose production machines for altcoins, who runs the slickest of crypto PR operations, and is currently running promotional giveaways of machinery (the sort that’s no longer very useful for mining actual bitcoin?) for Blackcoin miners?

Which isn’t at all ironic given that the BlackCoin sales pitch is creating the non intensive mining network actually envisaged by Satoshi.

It’s all too fabulous to be true. And so very different to conventional money or equity systems, which instead of being guided and managed by obscure IT guys and other mysterious individuals we don’t know very much about, are overseen by evil economists appointed by secretive public departments, heads of state, or unaccountable corporate boards of public companies.

But at least the altcoiners are learning, money doesn’t grow on trees! Stakes (a.k.a capital, or valued equity) are needed in the first place. And if you don’t have that capital yourself, it needs to be transferred into your system from somewhere else. Even better if it’s then used productively to grow capital, so that the 1 per cent money supply expansion — opps, sorry, you prefer to call that a “dividend” — doesn’t become overly dilutive.

Oh, the fun of reinventing existing systems! From the “proof of stake” white paper (adapted by us): 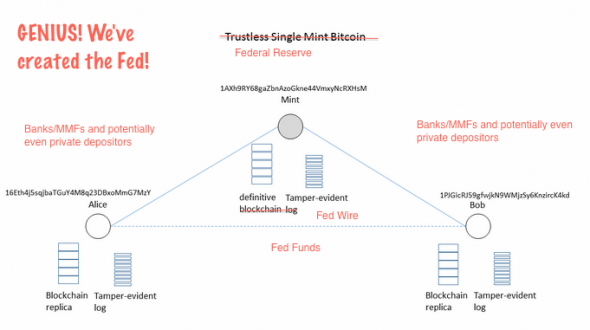 The only difference with the BlackCoin version is that one “minting agent” oversees all wallets rather than just the super-wallets of “second-tier” minting agents like banks. Oh, and the multi-stakeholder society BlackCoin envisages (unlike the one advocated by institutions like the World Economic Forum) will never be very “multi” due to capped supply.

In other shock news: here’s some altcoiners discovering that a 51 per cent attack in a stake-system is equal to duh, duh, daaaaah…. a hostile takeover.

With BlackCoin, or any PoS the 51% attack requires that you actually purchase 51% of the coins (or at least 51% of those in the active wallets as those are the ones minting). This type of thing would be quite noticeable as transactions are only pseudo anonymous and there would be a massive amount of buy pressure on the coin. It could also be thwarted by simply not selling as most large holders would do when they see their stock rising at exponential rates. For this reason it is believed that a PoS may prove more resilient to a 51% attack.

*KnC says they have no special relationship with BlackCoin, and that the cryptocurrency offer is just a redistribution of pre-purchased hardware.

How greed is holding crypto back In the past two months I have become more ...

VoidSpace is a twitch-based MMORPG set in a sandboxed world called The Void that you ...